Mapping and GIS information is one of the classic “big data” problems. An awful lot of work goes into the formatting and display of mapping information in Google maps/Google earth/Apple maps etc. Satellite and aerial Photography calibrated against position information, layouts of roads and streets, boundaries, etc. It’s a big problem, it’s always been a big problem, and it’s a good example of how reliance on that data can ruin an otherwise good service.

I live in a decidedly rural area, and for many years Google’s maps products had my road labelled with the wrong name. That was annoying, but wasn’t a big deal because not much depended on that information being correct. It actually did get fixed just a few months before Apple released their new replacement for Maps on iOS which uses Apple’s data instead of Google’s data.

In September 2012, Apple replaced the Google-data driven maps with it’s own Apple-data driven maps application. Mapping is a big problem, and I don’t think Apple treated it lightly. They acquired companies and brought in data from different sources to start from scratch to try to catch up to the level of detail Google has in their datasets.

Problem: my road which had just been fixed in the Google datasets, was now wrong in Apple datasets. It was really wrong, too. In the Google sets the road was named wrong, but the house numbers were more or less correct. In the new Apple datasets, the road I live on disappeared. The road overlay itself does show on the map, but now has no name and doesn’t correspond to any civic address, just a rural area name and a postal code which covers a broad area. They actually have the first hundred meters of the road labelled correctly on the map, which then mysteriously ends (even though the real and overlayed roads continue). Consequently all the civic address numbers for the entire road are bunched up in this little 100 meter-or-so stretch. So not only does the dataset not know where I live, it thinks my address is in a place about six kilometers away.

This, naturally, would play havok with navigation directions. Thankfully, I already know where I live and don’t need GPS to find my way back home. If I have to tell anyone else navigating to my place, I have to say “If you’re using Apple’s maps it will lead you to a place about six kilometers away, just keep going down the road”

This is where things start going bad. Several services in iOS are now based around this “geofencing” concept. Applications and system operations get triggers based on proximity to a fixed geographic reference. The easiest example of this is the iOS “Reminders” application, where you can put in a reminder to do an alert when you enter/leave a geofenced area. i.e. – “Remind me when I get home to take out the garbage” 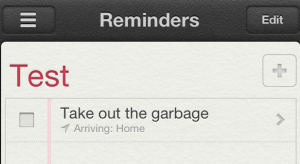 This geofencing idea is fantastic, since I never remember to actually look at the reminders app, and doing reminders based on times can be inconvenient. “Remember to take out the garbage at 7pm” “Oh wait, it’s 7pm and I’m still at work, guess no garbage removal then”

Geofencing completely falls apart when the system can’t determine what “home” is. “When I get home” sounds pretty simple, but if the map data returns that “home” is a place six kilometers from the actual home, geofencing will never be set off. You’ll never get a reminder to take out the garbage, and soon you will be wallowing in filth.

Lots of applications use the Apple map data as a backend for their geofencing, and they will all break because of the bad data. Garbage in, Garbage out as they say, or in my case – Garbage never taken out.

Here’s where things get silly: location services in iOS uses real GPS (and A-GPS, depending on your point of view). GPS returns coordinate data for position as latitude/longitude: you know those crazy numbers like “48.945462, -69.676252” which give a position here on planet Earf. At some point in this chain iOS converts latitude/longitude GPS coordinates from the GPS device into civic address map data. The problem is that despite the fact that location services’ position derived from GPS coordinates, you cannot use GPS coordinates to specify a location in the iOS address book (which is about the only way to specify places for use by other applications).

This would be the easy solution to poor civic address data. Just be able to enter the latitude/longitude GPS data into the address book of a location, and let location services do the rest. After all, GPS data is the source of all this information. Dummy up a new field in the iOS address book, call it something like “geo” and enter the GPS coordinates, you would be able to just use that data as a location. “Remind me when I get to geo to take out the garbage.”

Sorry, it doesn’t work like that. You can enter that information into address book, but iOS will tack the country onto the end of it (“Canada” in my case), ignore the latitude/longitude and try to pick some position that indicates the country, like this. 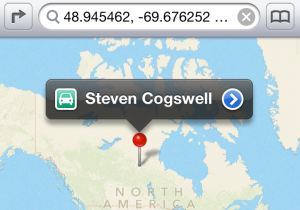 Which makes it even more useless than being six kilometers away, now it’s about a thousand kilometers away. Even better: Apple’s Maps actually understand the coordinates, because if you go into the field at the top of the app and backspace over “Canada” and re-submit it, it works correctly. You can’t remove the Canada from address book, though, and address book is where all the queries for “home”, “work”, “geo”, “dog pound” go through.

When iOS 6 initially was released, and it had this bad map data, I was disappointed. After all, it had been wrong for years in Googles map dataset, and only just got fixed. What the new Apple-derived maps application had that the old Google one did not, however, was a way to fix it. Right in the application, “Report a Problem.” 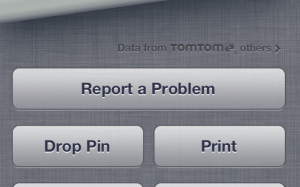 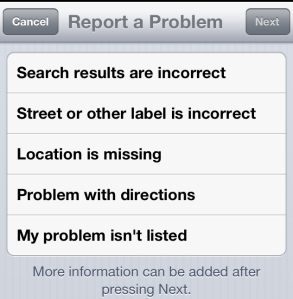 I used this to report the problem. In fact, I’ve used it many times. It’s going on eight months since the release of iOS6 and the data has never been fixed. I’ve also tried using the “send feedback to Apple” section on their website to no avail. There’s actually no guarantee that this will ever get fixed, not in iOS7, or anything later because it’s not iOS that’s the problem: it’s the data it’s sourcing.

I don’t even know where this bad data comes from. According to the maps app, data comes from (but I’m sure isn’t limited to) Tomtom, Acxiom, AND, CoreLogic Inc, DigitalGlobe, DMTI, Factual, Getchee, INCREMENT P CORP, Intermap, LeadDog, Localeze, MapData Services Pty Ltd, MDA Information Systems Inc., Urban Mapping, Waze, Yelp, CanVec, CIGAR, Flickr, GeoNames, GlobCover, NASA, OSDM, OSM, StatCan, Tiger/Line, and VMAP0. Someone in that group has my road entered wrong, and there’s no way to find out who, or get them to fix it. My only interface into this is the Apple “Report a Problem.”

The point of all this is that because of this Bad Data, all these services that hinge on the geolocation data are rendered useless. I can’t take advantage of them, it’s as if they do not exist. Apple and other companies invest lots of money in time developing good software and hardware, and it’s rendered completely useless by a few bad entries in a database table somewhere, which is the real shame.

What can you do about this? The easiest solution really is, “just fix problems when they’re reported.” But that takes manpower, and as I wrote earlier, who knows even where this data is wrong. For all I know Apple gets ten thousand “problems” submitted every day which are kids who think it’s funny to ask that the street they live on be renamed “BUTT.”

There are solutions like the OpenStreetMap project (and similarly, Waze) which uses “crowdsourced” information. That’s great as long as you’ve got a crowd to source. When Openstreetmap was younger than it is now it had zero information at all about the area I live in. No streets, no roads, no names, no nothing. I invested a decent amount of my time to use my GPS logger to map out roads and enter the information and names for my region into their database, only to have another member of “the crowd” come along and delete it all. Openstreetmap is a little better populated these days, but it doesn’t mean anything with respect to the Apple maps problem since Openstreetmap’s data is not reflected in Apple’s data.

While writing this piece I went to Openstreetmap and checked. They do have the road name correct, but the civic house numbers are about one kilometer off. I’d consider editing it to fix it, but why bother if someone else will just revert it?

This is the problem of Bad Data, and isn’t just Apple’s problem, it’s just that Apple’s map problem is the best illustration I can give with personal experience.