Okay, we’ve tried twice already so let’s go for a triactor. It’s my third album of instrumental rock published in this terrible year 2020. See all the details on the Music 2020 page.

I know it seems like we just had to go through all this, but these are extraordinary times. It’s another album with six instrumental rock tracks, it’s Frameset and you can find it hiding from all the usual places, details on the Music 2020 page.

Fun fact, as of this writing the name on bandcamp is correct but the others (iTunes, Google Pray, Amazon, Spotify) incorrectly call it “Framset” so if you’re searching on those platforms you have to search for “Framset” and not “Frameset.” That’s my fault as I mis-typed the name when submitting. They say it’ll get fixed, eventually.

Well here we go again. It’s 2020 and I have a brand new album of that usual instrumental rock called Commutator. Get it wherever fine and not so fine albums are sold. See all the details on the Music 2020 page.

Yes, my new album The Alewife is now available. Ten tracks of instrumental rock. Get it from Bandcamp, iTunes, Amazon (US only), Google Play, Spotify. Full details on the Music 2019 page.

Night Attacks Fifth Album, All’s Well: A Night Attack Album is out. It features “comedy” from Brian Brushwood and Justin Robert Young and special guests and “music” made by myself as seen here in the Night Attack music.

It’s super cheap ($1.99 at this writing). Get it from iTunes, CDBaby, Amazon MP3, and Google Play. You can also listen on Spotify.

Update: The album made it all the way to #3 on the iTunes album chart (all albums, not just comedy). #1 on Amazon Paid Albums, #2 on Google Play (all albums), #1 Comedy on iTunes, Google Play, and #1 Amazon Spoken Word/Comedy.

The album on spotify as a playlist:

Or if you hate the music parts:

Number. Three. Album. In all of itunes. Full stop. All categories. If you got $1.99 to spare and want to be part… twitter.com/i/web/status/1…

If you’re looking for music related to Night Attack then you you can find it here.

If you’re looking for #1 comedy album All’s Well: A Night Attack Album you can find it here. 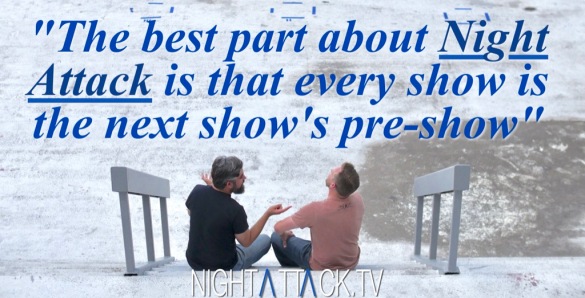 Let’s make this one short and sweet. I have a new album of garbage out. Sorry, none of it is to do with Night Attack. Get it from all the usual places. Bandcamp, iTunes and Apple Music, Amazon MP3, Google Play, Spotify and others I’m sure.

You can see all the details on the Music 2018 page.

END_OF_DOCUMENT_TOKEN_TO_BE_REPLACED

It’s a christmas miracle.  Well no, actually it’s not.  I’ve made yet another two tracks for xmas.  I figure all my regular music will be forgotten to the ages but my mediocre xmas music will live forever as filler between the hundred times a day “Jingle Bell Rock” gets played.

Can’t get enough? Here’s all the Xmas/new years’ tracks I’ve made over the years.


This is the track that started it all:

“What about a snuggie that had xmas lights that played in sync with trans-siberian orchetsra?”

Oh hello there. You may recall that early in the year 2016 I put out an album called Crap Chute’s Concentrated to much critical acclaim. In years’ gone by I have followed the model of releasing one album of material every calendar year.

Well this year I do the unthinkable and I’m releasing a second album of new material. Twelve new tracks, fifty minutes of new music.

Okay, I hear you saying “but it’s a shorter album than usual, and the tracks aren’t twenty minutes long like they usually are”, and I don’t care, it still counts. Thus we have Crap Chute’s Canal Route.

You can get this album, like all my albums from http://stevencogswell.ca. If you use the super secret coupon code “everywhere” you can get some ridiculously stupid discount off the full price. Also you can use that code to get my full discography if aren’t lucky enough to own all my previous albums yet.

You can also get Crap Chute’s Canal Route from iTunes/Apple Music, Amazon, Google Play, and listen to it on Spotify.

If you get it from http://stevencogswell.ca, you can get it in your choice of format including weird-ass geeky lossless and obscure fedora neckbeard formats as well as standard MP3. It’s probably also cheapest that way, and affords you the maximum amount of freedom.

Yes friends, I said Freedom. Crap Chute’s Canal Route is released under a Creative Commons license. If you’re confused what this means, don’t worry too much about it, but I wrote a pretty complete explanation to help you through.

The Road Until now